Welcome to our online store! Join Free or Sign in / Seller Login

Meet Andrii Vergeles, the engineer who waved the Magento flag at the top of the world.

The epic, snow-topped Caucasus Mountains are some of the tallest and most perilous peaks in Europe. Almost touching the sky between the Black and Caspian Seas, and occupied by Russia, Georgia, Azerbaijan, and Armenia—they provide mountaineers with difficult challenges.

“Climbing mountains is always dangerous, but being a positive-minded person I never think of death issues,” admits Andrii Vergeles, 28, from Kiev. “Though it is really risky, mountain climbing gives me so much pleasure.” Five years ago, Andrii, a quality engineer at Magento’s Kiev office, made a decision. He would climb ‘Shkhara’, the tallest peak in Georgia, and he would take with him a Magento flag.

"It took us two full days to reach the summit" 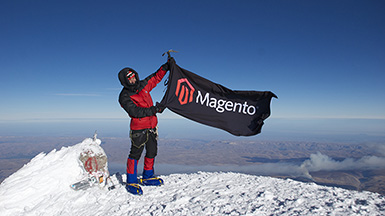 It would not be a casual climb. The Caucasus Mountains are the same extreme peaks that Jason and the Argonauts climbed in their mythical quest for the Golden Fleece. Conditions there can range from mild to extreme, according to climbing guides. But the weather can change in an instant.

“As I remember, it took us two full days to reach the summit,” recalls Andrii. When he reached the peak, at 17,040 ft., the exhausted climber proudly unfurled his flag.

Today Andrii is a quality engineer at the Magento developer, Eltrino. He has now waved a Magento flag atop three other mountains in the Caucasus region.  “My job is still connected with the Magento platform,” he explains, “and the Magento 2.0 launch is a really important event.” Andrii still wears a Magento sticker on his trusty safety helmet. 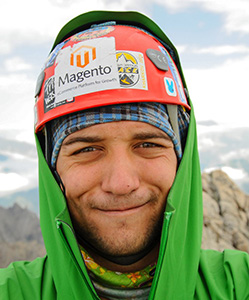 Like Magento, Andrii is always looking to reach new heights. He is planning a trip next autumn to scale mountains in Nepal and Pakistan. “My friends and I are going on an expedition to Manaslu,” he reveals. That mountain, a 26,781 ft. tall monster in the Nepalese Himalayas, will be his toughest challenge yet. But it is just the beginning, he says. “There are many more mountains that I would like to climb.”

we ship to over 200 countries

Use the world’s most secure

Professional assistance for a smooth

Please contact us for all inquire, our support team is available Monday to Friday 8am to 6pm..

© 2020 iYapMall.com is a registered trademark.